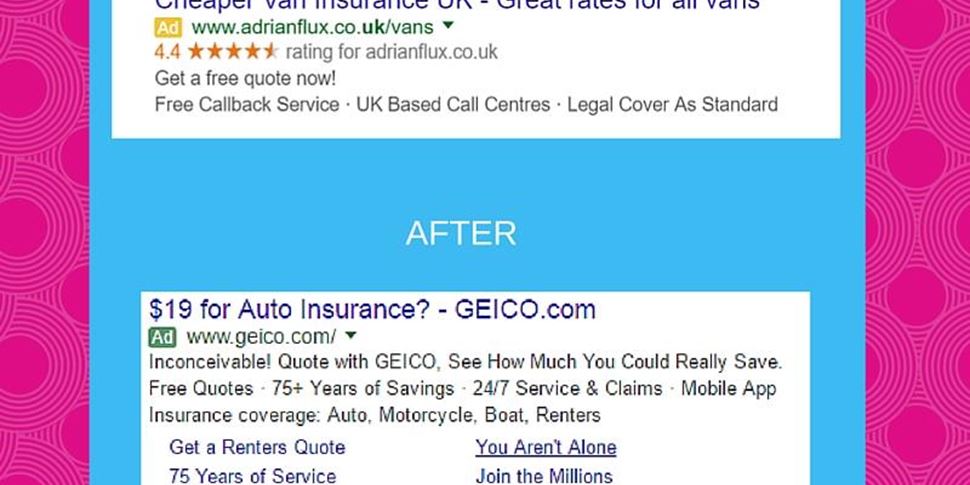 Previously, ads on the SERP contained a yellow 'Ad' label beside the Display URL but Google has now went green! What does this mean?

Google run thousands of experiments every single year - many of which we have no exposure to. Based on the outcome of such experiments, more permanent changes are made, including those to the Google SERP. The removal of right-side ads back in February 2016 was picked up promptly and caused mixed views among many SEMs, with the majority now in agreement that this was a positive move to ensure cross-device consistency.

Now, another change has come into play that was quickly noticed by the team at Loud Mouth. Previously, ads on the SERP contained a yellow 'Ad' label beside the Display URL but Google has now went green!

The question is will this new green ad label affect CTRs?

According to research conducted by Mark Irvine, a Data Scientist at WordStream, the change in colour has only affected searches on Google.com - no partner search engines that run Google ads (such as Ask.com) have been significantly affected.

To date, the new green ad label on Google.com has seen CTRs increase by approximately 15% - 13 times more than on partner sites.

So why would the new green label increase CTR?

Is the increase in CTR due to the green ad label being less noticeable than the yellow label and therefore making it appear more like an organic listing?

We checked in with some of our PPC Account Mangers to get their thoughts on the latest change.

'I think it will be a positive move for our clients with more clicks but it may increase costs. The ads look more organic now and it's fairly difficult to spot any real difference between a paid ad and organic listing, I think this has been Google's plan ever since they removed the ad listings from the side.'

'Although the change appears subtle to the naked eye, I believe there could be a substantial impact. The Search ads blend in more naturally and it's very tricky to distinguish between paid and organic listings on first glance. This will give advertisers greater influence to integrate their brand into the search results and in the age of native advertising, users will be more likely to engage in a positive manner.'

'It will be interesting to see if the switch over to green ad labels will have an effect on click through rates as the green label lends itself more to the look of organic listings. Will customers realise they are clicking on a paid advertisement or will they assume they are clicking an organic link? Only time will tell.'

So far, we have noticed a minimal difference since implementation of the change but we are confident that it will become more evident in time. For now, we will continue monitoring this on our reports and keep the focus on creating high quality ads!